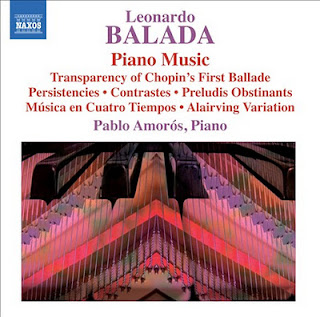 Leonardo Balada (b. 1933) has written some extraordinary orchestral music. His solo piano music up until now has been unfamiliar to me. Pablo Amoros performs a cross-section of it spanning Balada's entire career on Piano Music (Naxos 8.572594). In the liner notes Balada makes reference to how he believes the piano as a solo vehicle is somewhat timbrally outmoded in the contemporary compositional scheme of things. Nevertheless in the six works represented on the album (covering the period from 1959 through 2010) he makes a go at carving out musical structures that suit his needs expressively.

The works are neither bravura showpieces nor are they parlor ditties for the well-motivated amateur. Instead they are a glimpse into the melodic-harmonic mind-as-workshop of Maestro Balada. Forms take shape, ideas come to the fore, concepts are worked out and in the process he leaves us with music that is as expressive as it is at times quirkily cerebral. In a way his solo music reminds me of parallel works by Carl Neilsen, or some of those by Heitor Villa-Lobos. They at first seem diffuse, disjointed (at least they did to me), the form and logic taking shape in the mind only after fairly considerable listening time.

It is music that can have a surreal, abstract air, for example in his reconstructive collaging on "Transparency of Chopin's First Ballade" (1979). Snatches of Chopin's theme come in and out of play in a matrix of transformed transformations. At other times a present-day equivalent of baroque line weaving and quasi-counterpoint come to the forefront, only modernized. Some of the music has a stream-of-consciousness "fantasy" quality, with mood and disjointed narrative dictating what elements appear in succession.

In the end you get a wealth of music and a side of Balada that extends and complements the orchestral side. Some of the music is difficult (to play and to grasp), some of it quite disarmingly straightforward. All of it is interesting and, I might add, well played by Pablo Amoros.
Posted by Grego Applegate Edwards at 4:56 AM