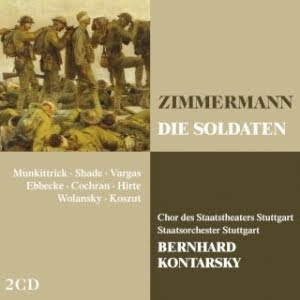 Bernard Alois Zimmermann (1918-1970) was a composer of some renown in Europe during his lifetime but got less attention here in the States at the time, compared with Boulez or Stockhausen. Yet several import recordings made their way over here and were appreciated by the devoted modernist cotery of the era. His untimely death in 1970 more or less put a period to his influence here. But not permanently.

The recording was originally released in the '90s, but should be much easier to find in the States now. It is an excitingly expressive, spirited and well executed performance by all concerned. Credit should go to Maestro Kontarsky, who is one of the very best of the new music conductors active today. The performance here, the second recording of the work extant, has a remarkable flow to it. The wide intervalic skips and rhythmically irregular serialist-edge-of-tonality vocal lines combine with the vividly imagistic orchestral and choral parts in ways that make sense of Zimmerman's music. Everything must be phrased as natural sounding and grouped according to the logic of the harmonic-melodic arch of the score for the music to work. Kontarsky has gotten a magical result that brings the music to life like one composite being, an eloquently speaking, naturally breathing, remarkable music-making creature of art. Deserving credit should also be given to the soloists, choir and orchestra. They are magnificent. But it's plain to hear that Kontarsky has spent painstaking time in rehearsal, working on the fine points and nuances of the score. He brings out the best in the performers.

As you listen a number of times to the result of such careful and expressive execution, you begin to appreciate what a musical masterpiece Die Soldaten is.

This is a marvelously ultra-modern work. The Kontarsky version will be hard to beat. Get this one by all means if you have a liking for the utopian new music in its classic phase.
Posted by Grego Applegate Edwards at 5:34 AM