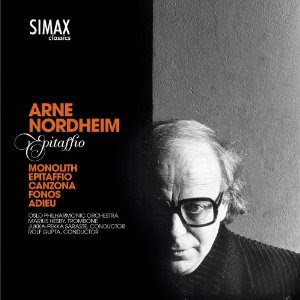 Norway, modernism and Arne Nordheim (1931-2010) go together. The composer Nordheim created a body of work that helped put the Scandinavian music scene on our maps from the 1960s through to his passing last year. A retrospective of some of his orchestral gems, aptly titled after his composition Epitaffio has come out (Simax Classics 1318) and is now readily available in the States. This is a happy occasion, tempered of course by our loss of him from this earth. The Oslo Philharmonic under Jukka-Pekka Saraste and Rolf Gupta definitively perform five of his works, from the "Canzona" of 1960 through to the 2003 "Fonos, Three Memorables for Trombone and Orchestra."

This is high modernist brilliance from beginning to end. To hear these pieces well-played on a state-of-the-art sonic stage is to come away quite impressed, indeed.

His music has some of the discursive logic of Edgar Varese, in that the organized unfolding of the orchestral phrases and sectional entrances entails nothing short of a profoundly meaningful and ingeniously constructed series of human utterances, in this case of course musical. Instrumental colors enter and interact with one another in endlessly recombinatory ways. Nordheim is a master of the full orchestra-as-paint to his imaginary canvas.

Every piece stands out as singular and significant. I especially find the 2003 "Fonos" for trombone and orchestra a knockout as performed here by the philharmonic and trombonist Marius Hesby. As the last piece chronologically it is programmed second-to-last, which allows the ear to experience it as a kind of stirring life-finale, with the brief and poignant "Adieu" giving us a touchingly regretful coda to our evening's program.

Those who may have missed Nordheim's music are excellently served with this anthology. Those who have not will find the performances and sequences revelatory and enthralling.

Very much recommended!
Posted by Grego Applegate Edwards at 4:38 AM