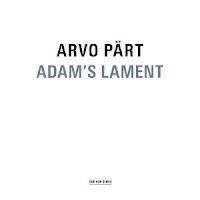 The release of new Arvo Part on ECM promises to be an event. Adam's Lament (ECM New Series B0017591-02) lives up to the promise. The Latvian Radio Choir, Vox Clamantis, Riga Sinfonietta, soloists, the Estonian Philharmonic Chamber Choir, and the Tallinn Chamber Orchestra, all under the direction of Tonu Kaljuste, alternate and combine in various configurations for the distinguished performance of eight recent Part choral works, some short and lovely but relatively incidental, the rest first-rate, serious works.

The title work is the longest at nearly a half-hour. It has the archaic-yet-modern quality and spiritual impact of Part at his innovative best. It is a through composed work that flows and ebbs with mystical majesty even as it suggests echoes of ancient chant.

The other works add quite nicely to the impact of the disk. There's is even a short Christmas Lullaby for a seasonal plus.

As expected the performances are impeccable, the sound of the ECM four-star sort, perfect for this kind of music.

Nothing is lacking here--another smashing Part offering. He remains one of the world's most important composers today and this CD confirms it in a spendid manner.