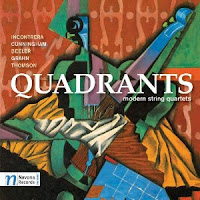 The string quartet has become one of the primary vehicles for "serious" chamber music. Dating from the example of Beethoven's late quartets, it has become a medium in which a composer might express his most "advanced" music. For those seeking "light classical" fare, it is generally not the place to look.

Fittingly then, the new anthology release of modern string quartets, Quadrants (Navona 5883), is filled with music that takes itself rather seriously, as well it should.

The music ranges from Virgil Thomson's first quartet to various modernisms by Marie Incontrera, Michael G. Cunningham, Ulf Grahn, and two by Alan Beeler. These latter are names not well known but the music has solid construction, inspiration and bears repeated listening.

The recorded sound is lively, the performances exacting and expressive and the whole package something a lover of modern chamber works will most certainly appreciate.

I wont hold it against anyone that this was the CD I was listening to when I lost power (turned out for six days) during Hurricane Sandy. It wasn't the music. . . was it? No. It was the wind. I must say though, the music went with the wind pretty well while it lasted. That is saying something for the music, and I suppose the wind!