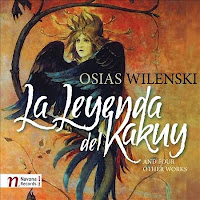 La Leyenda del Kakuy (Navona 5882) is a kind of grab-bag of the music of Osias Wilenski. It contains pieces for solo violin, solo clarinet, solo bassoon and solo piano, and the title work, a musical telling of the Argentinian legend that is in some ways similar to "the Ant and the Grasshopper."

"La Leyenda del Kakuy" has seven short movements, is scored for six chamber players and has a kind of multi-voiced labyrinthine feel. It is quite decently performed by Tapestry East under Ovidiu Marinescu.

The "Sonata for Solo Violin" features an adventurous, well-thought series of movements that engage the violin in idiomatically expressive channels. It manages to sound modern in a romantic sort of way and would not be out of place among similar solo works from the 20th century by Reger and Hindemith, without sounding like either.

The other works have their interest as well. I would now most certainly want to hear larger-scale Wilenski. This one may not be essential but it is quite nice. And Wilenski has a voice.

Posted by Grego Applegate Edwards at 5:56 AM