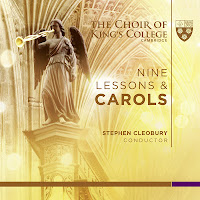 For those for whom Black Friday (in the States) is but a more and more hysterical outcome of economic considerations taking over the holiday season, there are antidotes.

The wonderful King's College Choir of Cambridge has a Christmas Eve tradition dating from 1918. It was decided then that the Christmas Eve service would alternate brief readings from biblical passages describing the Christmas Story with carols appropriate to that part of the story. They always begin with the carol "Once in Royal David's City" and they always sing a new specially commissioned carol for that year.

Christmas music connoisseurs have long appreciated the broadcasts yearly and a number of beautiful recordings have been made of the choir in performance on Christmas Eve. The latest is of the full service including the readings, and a gathering of the latest carol commissions, by the new King College Choir label.

It is the choir in its goose-bump glory. The new carols are a refreshing addition, the traditional carols will warm your heart and the readings will put it all in context. It is a sonically alive recording that you may well want to make a part of your Christmas tradition. It is extraordinarily beautiful.