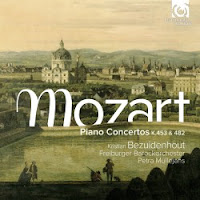 Think of Mozart's "Jupiter Symphony" as performed by Bruno Walter and a large modern day symphony orchestra. It has a powerful sound and it is not hard to imagine its place alongside the early-middle period symphonies of Beethoven. Do that with more early, more typically classical period Mozart and you get that sound as well, at least in the tutti, fortissimo passages, but perhaps something is lost? Even in later Mozart?

That's what occurs to me listening to pianist Kristian Bezuidenhout, and the Freiburger Barockorchester under Petra Müllejans performing Mozart's Piano Concertos K.453 & 482 (Harmonia Mundi). For the recording Kristian plays on a period instrument; the orchestra is not large and they too seem to be playing period instruments.

The sound of the piano is more delicate, that of the orchestra more nuanced. With a smaller number of strings the wind parts stand out in greater detail and offset the strings more completely. The tutti sections can still be powerful and are, but the balanced has shifted. A recording such is this one, which is very good by the way, helps you envision the classical period and Mozart's "sweeter" qualities in a very different light.

The two piano concertos sound perhaps more as Mozart heard them in his head when he wrote them. And the classical era sounds less like a path to romanticism than a musical style perfect unto itself in its own way. Paradoxically, an excellent period instrument performance like this one sounds more modern than the amassed forces of the romantic orchestra doing Promethean battle with the soloist on his hard and louder sounding modern piano. That's not to say that we should stop enjoying or listening to present-era performances of classical era music by larger orchestras of modern instruments. That would be foolish.

Kristian Bezuidenhout and company have given us a fascinating window into another era, another Mozart, and done it with full poetic expression. Bezuidenhout is a wonder for Mozart and the Freiburger Barockorchester match the pianist's sympathetic sonarities with artistic grace. Bravo to this one!