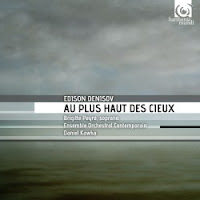 Russian composer Edison Denisov (1929-1996) made an impact on the west with a number of prominent releases (most notably one with Bernstein and the New York Philharmonic) in the '60s, then more or less disappeared from our radar. His music was sometimes experimental (as typical of the times), always contemporary in the most vital sense.

He continued on. Daniel Kawka and Ensemble Orchestral Contemporain, with Brigitte Peyré, soprano, for the vocal works, have gathered a fascinating grouping of this later compositions in Au plus haut des cieux (Harmonia Mundi).

It turns out that as his music matured, he developed a fully balanced style that had striking originality. His writing for orchestra became rather extraordinarily lucid, both very liquid, flowing, and impactfully orchestrated. Brigitte Peyré has genuine presence on the works for soprano and the Ensemble Orchestral Contemporain under Kawka turn in a detailed, sonically stunning set of performances.

If, like me, you are not very familiar with the later Denisov, or even if you are, this release comes as a revelation. He was a composer of the sublime. This must be heard!