Weinberg, Symphony No. 19 "Bright May," The Banners of Peace 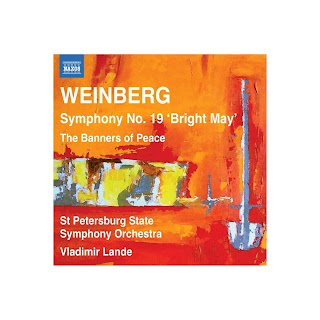 A peculiar thought occurred to me yesterday. If you picked your 20 all-time favorite symphonic movements and used a MIDI device to take recordings of those movements and line them up so that they all were in the same tempo, then played it back, what would it sound like? A huge cacophony I suppose. What it wouldn't sound like, I suspect, is the later symphonic music of Mieczyslaw Weinberg. Aside from the thickness of the musical texture of the collage, it wouldn't sound like later Weinberg because at that point he didn't quite sound like anybody. That doesn't mean that his music was avant garde. It doesn't even necessarily mean that all the later music was great. It wasn't always. But it is saying something about that music.

Along those lines we have a new recording of two such works, Symphony No. 17 "Bright May" (1985), and "The Banners of Peace" (1985) (Naxos 8.572752) with Vladimir Lande conducting the St Petersburg State Symphony Orchestra. These were works Weinberg wrote when he had around 10 years left to live. No. 19 was in the sequence of a rather astonishing 26 symphony output.

The symphony was written to commemorate the anniversary of the Russian victory over German forces in World War II. It has an elegiac quality, still fits quite comfortably in the Russian modern orchestral tradition, yet sounds less directly influenced by Shostakovitch and Prokofiev that was sometimes the case in previous efforts. That is not to say that works that fall under those influences were therefore derivative in a negative way, they mostly stand on their own and some are quite brilliant. But Symphony No. 19 stands out as one of the composer's more original forays.

The sweeping largo passages, reflective, meditative, are what first strikes one about the symphony. They are rather beautiful in a bittersweet way. It is a work that does not reveal all its gifts in a single hearing.

The symphonic poem "The Banners of Peace" is less introspective, more outgoing, modern yet filled with a kind of passionate expression that puts it out of the orbit of much of the music being composed in the more "advanced" orbits at that time.

Neither work is a masterwork among masterworks. They are both high-quality Weinberg. If the themes do not jump out at you like some of his finest works, it only means that as a listener you have to work a little harder to appreciate the music. In the end it is worth your time to become familiar with them, in my opinion. Conductor Vladimir Lande gives very sympathetic interpretations of the works and the St Petersburg State Symphony Orchestra shows spirit and subtlety. I am glad to have this one to return to.