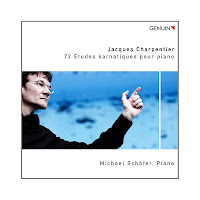 We live in a kind of renaissance of recorded sounds. More than 100 years of recordings are potentially available to the listener, and for nearly half of those years recording technology flourished so that most recordings have good fidelity. In the digital era the recording of works and composers less familiar to most listeners has continued at an accelerated pace, so that today we can routinely make discoveries that might have been nearly impossible in the past.

Jacques Charpentier and his 72 Etudes karnatiques pour piano (Genuin 12257 3-disks) is a good example. The composer is still with us (b 1933), happily. And such a gargantuan set of etudes! In some earlier period this music in complete form would not have been so easy to hear, except if one bought the printed edition of the work, assuming it was available, and played it through for oneself.

Of course it would not much matter if the music was tepid or mediocre. In the hands of Michael Schafer on this recording, it is far from that.

This is piano music of great complexity. There is in the melodic structure and rhythmic figuration something that might be traced back to a Carnatic influence, but primarily this is modern pianism that stands on its own. It owes something to the mature Messiaen for its use of motives and declamatory phrasings that sometimes seem slightly birdcall-like. For the rest it is an extraordinarily interesting and original, accomplished group of etudes that bears deep listening.

Michael Schafer does the music full justice. He has mastered the difficulties and presents the music to us in a fully confident, expressive way. There is much musical treasure to mine in the 72 etudes and it will be a revelation for those for whom modern advanced sounds are both sufficient in themselves and necessary as a regular listening habit. Highly recommended.

Posted by Grego Applegate Edwards at 8:25 AM