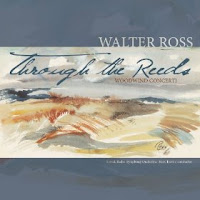 Gump's adage about the box of chocolates worked well in a booming economy. Today's world is like chocolates you've had before and you KNOW what you are getting, force fed or no. New music, however, really is an adventure in the unknown.

And so it was with the Walter Ross's woodwind concerti CD Through the Reeds (Ravello 7854) when I first approached it. What was I getting? Turns out Water Ross has written four concerti in a neo-classical mode that shine brightly with a lyricism that will please many.

One note for starters: the order of the concerti on the disk is not the same as listed on the label. You will listen in vain for the bassoon concerto in the second spot. It's third. Once that is clear you can settle down and listen to some very nice music.

It's all very lyrical as I've mentioned, in a post-Stravinskian mode with a distinctive American Pastoral bent (and so the title to the CD fits). Ross joins Hindemith and Reger (when Reger was in that mode) as a neo-classicist--not necessarily of their stature, one needs to hear more for that thought, but certainly of a highly engaging sort.

The four concerti--for oboe d'amore, bassoon, flute and guitar, and oboe and harp--are all played very nicely by the Slovak Radio Symphony Orchestra under Kirk Trevor. Soloists Sintal, Mesina, Turner, Kubrova, Fabera and Antalova all sound right and well suited for their parts.

It's the sort of music that has diatonic accessibility and high quality. It will charm those who want something nice while being pithy enough to engage more discerning listeners. Bravo.