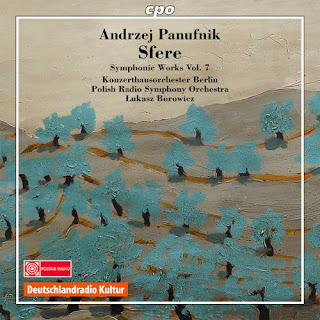 Adrzej Panufnik (1914-1991), Polish modernist of distinction, has had some distribution of his music here in the States in the past, but he hasn't been quite at the level where, for example, the Classical section of the old Tower Records store in the Village (Greenwich) would have put a new release in a showcase spot about the racks. As can be the case, his relative unfamiliarity has nothing to do with his stature as a composer. He is deserving of our listening minds.

I've covered his music here before, notably a review on November 13, 2012 of Vol. 5 of the series focused on today. We are up to Volume 7 of his collected orchestral works, titled Sfere (CPO 777 686-2) in reference to the 30-minute "Sinfonia di Sfere, Symphony No. 5", which forms the centerpiece of this volume.

I have not heard the other volumes, but whatever they contain, Vol. 7 is most certainly no afterthought. With the 5th Symphony, the Bassoon Concerto and two shorter works, it contains music of high interest and merit.

Panufnik in this volume impresses as a modernist with expanded near-atonality and a well developed sense of rhythmic drive in the bolder passages--with a nice bit of percussion fireworks in the symphony. His largo-like passages have a solemn beauty and unlike a Prokofiev or a Shostakovich, less of the sarcastic tang and bittersweet qualities you may hear with them. There is a times a well-expressed plaintive feeling. He comes off as an independent musical mind not especially in the orbit of the Eastern European luminaries active in his lifetime. He is more attentive to classical form than, say, Penderecki in his early years, and less strident. He is perhaps closer to Bacewicz in the slower sections, but only in the roughest sense. Sometimes I sense a rather uncanny affinity with Charles Ives in his mysterious, lingering string work. At any rate he has real bite to his music and a sense of monumental form (in the symphony and bassoon concerto at any rate) that is epic in the classic symphonic sense.

The symphony and bassoon concerto are masterful examples that beguile and satisfy. "Love Song" a short work of beauty with mezzo-soprano Sarah van der Kemp, and "Landscape", another fitting closer in a mysterious vein (the only work played here by the Polish Radio Symphony Orchestra, the others are performed by the Konzerthausorchester Berlin), are a bit more tonal than the two principal works in this program. In that sense they form an interesting coda to the "main event".

Conductor Lukasz Borowitz knows his Panufnik, it seems, and brings out the broad panorama of sounds with perfect ease and dedication. Bassoonist Michael von Schonermark gives us a nice performance in the concerto.

Panufnik comes across as an original figure on the 20th century modernist scene. I am impressed with this volume and in turn recommend anyone with an interest in new music to hear it.