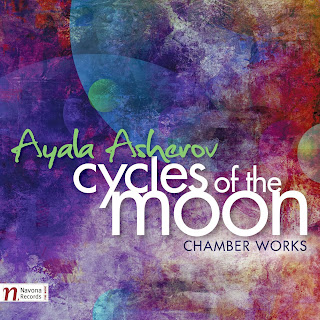 In the world of contemporary modern music there have been a burgeoning of categories that we all have applied from time-to-time, "minimalism", "neo-classical", the Darmstadt School, etc. The chamber music of Ayala Asherov, as heard in the recent anthology Cycles of the Moon (Navona 5928), doesn't quite fit any of them. It's certainly not cutting-edge avant garde music. It is tonal without especially fitting into neo-romantic or neo-classical camps. It perhaps has a sort of folk rootishness.

She is a native of Israel and I guess something of those roots come out. But honestly I've been listening without aid of press sheets and liner notes up until now, and it didn't hit me in any obvious sense that there were pronounced tonalities of Israel or Jewishness. The minor mode, a phase here and there possibly, but nothing in a full syntactical sense. Listening with that in mind I do pick up a tad of it. But mostly she writes in a straightforwardly tonal idiom, "neo-tonal" if you will.

That is in no way to detract from the music. It is engaging and I would even say original. There are seven multi-movement works in all, written over a period of the last four years or so. The composer intends them to be accessible, and so they are.

They are inventive, melodic, at times almost pastoral, and generally quite lyrical. I found myself enjoying them increasingly as I listened more than once. Ms. Asherov delivers a most pleasing program here. It's a matter of unassuming simplicity. And that is very refreshing.