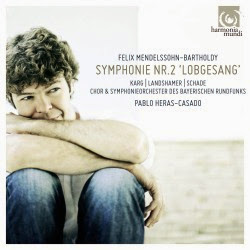 Mendelssohn's Symphony No. 4 "Italian" generally garners the lion's share of attention among his five. Admittedly it is irresistible in its charm and brio, but his other works in the medium deserve more attention than they sometimes get. His Symphony No. 2 Lobgesang (Hymn of Praise) has an epic quality, for example, unmatched for its choral drama.

The Symfonieorchester des Bayerischen Rundfunks under Pablo Heras-Casado gives the symphony a new recorded performance (Harmonia Mundi 902151) which is up for examination today.

Three brief but invigorating movements introduce the final, much longer section of the work, which is in the form of a cantata for soloists, full chorus and orchestra.

The choral movements have the lift of a Bach cantata with the longer form of Mendelssohnian romanticism. Hearing it all this well performed with modern digital staging is a bit of a revelation.

It comes across as a work much more worthy of our attention than I certainly have thought over the years. This is an exemplary performance of music that soars in the hands of Heras-Casado. A sleeper it may have been for more than 150 years. It has awoken and we are all the better for it.