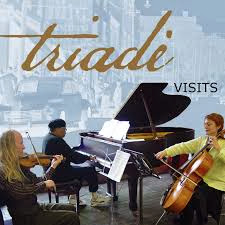 There are certain basic assumptions you make when you hear certain improvised musics. Jazz of whatever style has a corresponding set of basic forms and lines, depending on the era. Avant guard or free music whether swaying toward the jazz side or more in a "new music" realm has a certain vocabulary that may be transformed but is there in some way. The same can be expected when new music avant classical artists improvise. When classical musicians more in the tonal mainstream improvise, we aren't sure what to expect. First of all because it doesn't happen much. It's rather rare. Second of all it's going to be dependant on what the players agree upon, either tacitly or explicitly.

All that comes into play when you listen to the classical improvisatory piano trio Triade and their recent album Visits (Innova 249).

This is trio that achieves a musically lively confluence by working off a composed set of motives as a springboard. The pianist and informal leader Carei Thomas provides most of the compositional cells. Interestingly he has been involved in the AACM (Association for the Advancement of Creative Musicians) which is notable for the extraordinarily creative avant jazz the members have produced over the years. Triade doesn't create music that reflects that stylistic universe in any direct sense.

Gary Schulte, violinist in the trio, had been working on improvised classical with Thomas for a while when they came upon cellist Michelle Kinney and found between them a chemistry that they have been exploring ever since.

This is piano trio music that takes the well-established interplay of such a group in composed classical music and seeks to produce spontaneous collective music that has a logic born of the composed bits and builds upon each players considerable contribution to the whole that evolves. The music has at times an almost folk elementality, but otherwise has a modern pomo tonal outlook that engages in its immediacy and charm.

There are 12 pieces on the album; seven by Thomas, three by Schulte and and two by Kinney. The conceptual compositional cells provided by each take full flower in performance here. They are tonally and sometimes harmonically given and/or otherwise improvised structures that sing out in various ways.

Each instrumentalist has become so attuned to the others that the results sound like spontaneous compositions as much as they have the free-wheeling range of improvisations.

In the end we have a program fascinating and rewarding to experience. The trio provides exemplary model examples of what modern tonal classical music can and does sound like when improvised. It is a very impressive achievement that also is very enjoyable to hear. Definitely recommended.