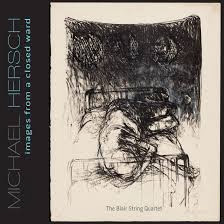 Now that we are in the '10s of this century it is pretty much established that a composer can choose notes vertically and harmonically as she or he please, anything from elemental tonality to sophisticated harmony to atonality, or any combination of the above, though Pierre Boulez famously objects to mixing tonality with its opposite. That need not deter us.

Michael Hersch has taken advantage of the freedom of now to create a 13 movement suite for string quartet, Images from a Closed Ward (Innova 884), a work from 2010 that here showcases the Blair Quartet. The music came to be as a result of Maestro Hersch meeting with American artist Michael Mazur (1935-2009) and the affinity Hersch developed with Mazur and his art, which has an overwhelming sadness about it. The first works that began Mazur's climb to attention and appreciation were a group of sketches and lithographs he entitled Closed Ward and Locked Ward, expressionist images of inmates of a mental asylum.

Michael, whom we gladly encountered in his solo piano collection the Sudden Pianist some time ago (see search index box above), has composed 13 movements that create a musical analog to the images. These are people without hope, and the music is wrenchingly sad in corresponding ways to the bleak imagery Mazur so movingly puts before us.

Tempos are mostly quite slow, dirge-like at times. There are strident assertions well beyond perceived tonality and there are quieter, more tender, regretful and a bit more tonal landscapes, both ends capturing the shifting moods of the inmates and Mazur's portrayals.

This is extraordinarily expressive High Modern music, perhaps something like Morton Feldman on an overdose of Belladonna. There is a kind of living horror that just keeps being in the same place, hour-after-hour for a lifetime. That is how the music feels and surely how it is intended.

It is masterful music and the Blair Quartet tackle the extremes of expression with excellent artistry. Surely this is some of the darkest string quartet music to be found. Nevertheless the kind of transcedence that well-composed music contains makes it not just bearable, but rather extraordinary, a music filled with humane compassion as well as despair.

If you are looking for something chipper, this is not it. Those who can stand up to the darkness, or rather the absence of redeeming light will be in for something of excellence. Michael Hersch is a phenomena.