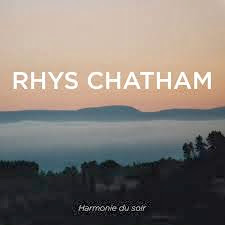 Placing Rhys Chatham's recent album Harmonie du soir (Northern Spy) in the modern-classical blog is deliberately provocative. It could easily go into the guitar blog as "avant rock" and nobody would give it a second thought. I put it here to underscore the idea that, increasingly, there are things being done with rock instrumentation--here multiple guitars, electric bass and drums to start with--that veer rather clearly in the direction of new music classical. Minimalism in the trance zone has had a natural affinity with certain "tribal" kinds of rock via the insistent repetition of motifs. Long jams in classic-period rock and beyond often take on a similar form that strives for a mesmerizing effect. Similarly some of Fripp and Eno's work well belongs in a space between rock and minimal classic and has trance inclinations in a more soundscaped, more nuanced manner than a typical rock band jam. There have been others on either side of the various divides.

The Rhys Chatham album on the title piece articulates steady rock rhythms on the drums, constantly drone-like rhythmic guitar chords (for six guitars) and appropriate bass lines to give the listener the direct experience of rock. The music stays for long periods in these zones with a singularity that takes it into minimalism proper.

"Harmonie de Pontarlier", the second piece, favors a large brass-wind ensemble, first with a rhythm accompaniment and recurring brass figurations, then with held notes and relative stasis, and further along then with the held-note drone plus rhythm and recurring wind figurations. It goes from there to another series of more active wind and brass motives that move forward with overlapping repetitions that have clear minimalist underpinnings, reminding at times of other strictly classic minimal works but originally so.

The shorter closer "Drastic Classicism Revisited" has a punk-rock feel with an uptempo rhythm on drums, a manic, constant singular barrage of one thrash chord and variants for four guitars, and the addition of "numerous trumpets" towards the end, the latter all but unidentifiable in the mayhem.

So we get three pieces, each distinctive and effectively original. For those who make a habit of listening to various forms of harder rock this album will seem familiar, yet with its minimalist insistency rather untoward. The new music listener may find the chaotic, hard-driving portions of the music either invigorating or excruciating, depending on mood and temperament.

Either camp will be called upon to redefine expectations, because by partaking of both genres in a boldly conflationary way Rhys Chatham has created music that intrigues, exhilarates and/or exasperates. It needs to be heard in any event. I may not be sure where to file this one but I am sure in has importance and originality.