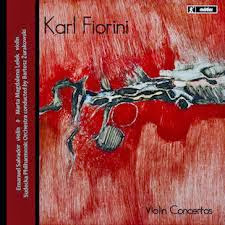 Ahh, modernism. Those that love it may be a breed apart. Those that have been avant so long it looks like tradition to me, to paraphrase and garble a blues lyric, take it all quite seriously. I do. And it's a fact--once you stretch your ears and musical mind to include all the notes there's no going back. And that is a good thing.

So today we have something "in the tradition" of the not-quite-traditional world of High Modernism. I am speaking about composer Karl Fiorini and his Violin Concertos (Metier 28533), nicely done in a new recording. Who is he? Well he came to this earth in 1979, so that makes him young. He was born in Malta, went to the Royal College of Music, he's apparently composed pretty prodigiously, winning lots of awards and acclaim on the way.

The two Violin Concertos are hallmark works in new music, to my ears. An equally young Emanuel Salvador is the solo violinist for the first and he is quite impressive with all the expressive zeal and stirring dynamic extroversion these works need. The same may be said for the violinist of the 2nd, Marta Magdalena Lelek. Bartosz Zurakowski conducts the Sudecka Philharmonic Orchestra in a masterful way and they come through beautifully.

"Concerto for Violin and Chamber Orchestra" (2006-7) is the first and it has a rather glorious exuberance, a stretched edge-of-tonality demeanor and skillful orchestral-solo construction that puts in somewhere between late Bartok and early Penderecki, to give you some idea of the sound.

"Violin Concerto No. 2" (2011-12) has a thicker texture, more motor insistence and brashness of the best sort. It is rousingly dissonant and powerful.

In both cases the solo violin part has a genuine idiosyncratic, outgoing quality that in the hands of these two virtuosi utterly convinces. The orchestra responds to the soloist with the give-and-take dialog one would expect.

Karl Fiorini gives us two excellent works that seem sure to enter the concerto repertoire. They are majestic, thrilling, ultra-modern and exciting to hear. Molto bravo!