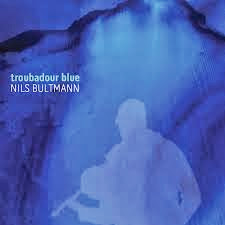 Violist, improviser and composer Nils Bultmann presents us with a new kind of quasi-Americana folkish modernism on his album of compositions and improvisations, Troubadour Blue (Innova 851). He comes across as a musical mind intent on going its own way, in this case through four sets of pieces that work their crafted structures into your musical mind with an artless charm that in part disguises a very artful presence.

"Ten Viola Duets" teams Bultmann with fellow violist Hank Dutt in a directly engaging suite that is built out of figures and motives Nils has improvised over the years with friends. There is a spontaneous feel to these segments that wind contrapuntally around themselves in a way that reminds slightly of Bartok's pieces in this vein in their folk-yet-modern approach, yet are filled with Bultmann's own vision and his sophisticated revamping of Americana. Don't expect a hoe-down, but do expect to feel the presence of roots and modernist extensions.

"From the Depths" gives us four improvisations for viola (Nils) and Stephen Kent on the didjeridu. The unexpected juxtaposition of instruments seems perfectly logical in the sense that generally the didjeridu role is that of a basso continuo in its rhythmic line weaving while Nils flows and flies overtop with spontaneous melodic invention, double stops and general adventure. This is fascinating to hear and situates the through-composed duets for two violas in terms of how both kinds of musical events relate to one another, how Bultmann has his own way in what and how he constructs it all. That becomes clear as you hear the two works one after the other.

From there we have a beautifully concerted folk-art solo for the viola entitled "Lucid". It is partly improvised, partly precomposed but both cadenza-like and earthy.

The final work, "Suite for Solo Cello" brings Parry Karp's fine playing into Bultmann's orbit via a five-part work that has archaic folk roots in its multiple-stops yet also pays homage to Bach's wonderful works for solo cello.

The work shows once again how Bultmann dwells on two plains and does so with great dexterity and even brilliance, namely the earthy folk and the high art heavens. Nils Bultmann shows us in somewhat less than an hour why he is one of a kind. And he does it all in a way that produces music that engages in a thoroughly rooted yet thoroughly contemporary way. Bravo!