Andrew Staniland, Talking Down the Tiger, and Other Works for Solo Instruments and Electronics 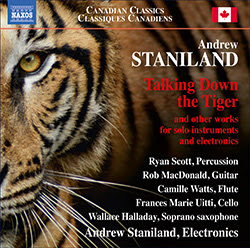 Andrew Staniland is a young Canadian composer of promise. His Talking Down the Tiger (Naxos 8.573428) presents five works for solo instrumentalists and electronics, the latter reinforcing and subtly adding to the live part in real time through recorded playback or alteration of the live sound.

"Talking Down the Tiger" features quiet toms and mallets (played by Ryan Scott), extended and altered via looping.

"Dreaded Sea Voyage" is for classical guitar (Rob MacDonald) and electronics, based on the recording on board the NASA reconnaissance space vehicle Voyager containing a sampling of "human music" in case the craft encounters other life forms in its travels through the universe. The guitar parts are altered versions of some of the music; the electronic part subtly adds to it.

"Flute Vs. Tape" has a most vivacious flute part, played with a dynamic energy by Camille Watts. The tape part is composed of the second flute, acting contrapuntally.

"Still Turning" is for cello (Frances Marie Uitti) and towards the end, a tape part that recalls themes from the other two works with which "Still Turning" forms a trilogy. In this, one of two movements that make thematic use of lines from T.S. Elliot's poem "Four Quartets," "Still Turning" captures via virtuoso cello the feeling of standing still while at the same time being in motion, for example if we stand motionless on earth as it travels rapidly in its orbit.

The final work, "True North," for soprano saxophone (Wallace Halladay) and electronics, captures in sound the fact that magnetic north or even "true north" changes position slightly over time according to changes in the earth's axis and other factors. A circle of four microphones corresponding to the four compass points feed into four-fold, widely separate speaker playback which the performer controls through playing in proximity to each microphone at will.

The music is basically tonal modern, with a bit of a harmonic-melodic edge, an attention to sound color and electronic enhancement, all of which subtly plays out on each piece.

Staniland certainly has imaginative conceptual creativity that he realizes in each of the pieces. The music sounds eclectically contemporary and retains interest. The electronic part generally reinforces the live music without calling much attention to itself. This may not be the album of the year among new music releases, but it is not uninteresting!