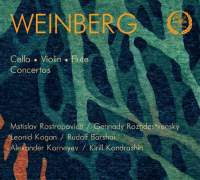 Mieczyslaw (aka Moissei) Weinberg (1919-1996) was not always in good graces with the powers that be over the many years he lived in Russia under the Soviet regime. This is not the place to go into the vicissitudes and dynamics of that relationship. Nonetheless there were a number of Melodiya LP releases of his music during his lifetime. Some of that is now generally available worldwide as a CD: the Cello-Violin-Flute Concertos collection (Melodiya MEL CD 10 02315). Recorded between 1961 and 1968, it features excellent performances by Mstislav Rostropovich on cello, Leonid Kogan on violin, and Alexander Korneyev on flute, respectively, in the solo roles.

The soloists were of course some of Russia's very best; the recordings give us three masterful interpretations and very lively orchestral accompaniment. All three works show Weinberg in fine form, brilliant.

The historical importance of these recordings make them invaluable and the performances themselves give us much to appreciate. They may not be perfectly definitive in their totality, but the solo parts get a glorious treatment. They are seemingly essential, then, for any Weinberg enthusiast, and anyone who wishes to know more about Russian musical modernism in the mid-20th century.