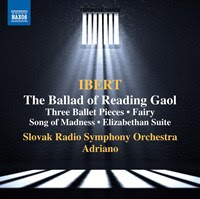 Jacques Ibert (1890-1962) is perhaps best known for his "Escales," but there is quite a bit more music from him, much of which does not get a great deal of performance these days. One might suppose that there were so many brilliant French composers competing for attention during his lifetime that Ibert has been unduly neglected as a result.

All that can be rectified in part by a new volume of some of his lesser-known orchestral-choral music, The Ballad of Reading Gaol (Naxos 8.555568) as respectably performed by the Slovak Radio Symphony Orchestra under Adriano.

The title work, based on the poem by Oscar Wilde, was considered rather daring, having been first written as symphonic poem between 1920 and 1922, and performed soon after. Its deft handling of a bleak prison world and themes of the terror and anguish of an inmate who had murdered his wife were controversial at the time. As a first orchestral work it has touches of the influence of Debussy and Ravel but a well-crafted and dynamic originality as well. It was converted into a ballet and first performed in this vein at the Opera Comique in 1937.

We find some worthwhile additional works on this anthology, namely Ibert's "Trois Pieces de Ballet" of 1921-22, a three-part concert suite from the ballet score, meant to depict various characters who frequented his mother's salons, the brief "Feerique" and "Chant de Folie," both from 1924, and the lengthier "Suite Elisabethaine" (1944), written with early music touches for incidental performance in Shakespeare's A Midsummer Night's Dream.

You can readily hear progression and development in Ibert's impressionist/quasi-romantic stylistic approach in these chronologically presented works. They are all quite pleasing if perhaps not exactly world-class 20th century masterworks. They do add a good deal to understanding and appreciating Ibert, helping to flesh out a multi-dimensional portrait of the man and his music.

It has its charms and will afford you a good bit of enjoyment, especially if you are of the Francophile contingency. It may not be particularly essential listening, but not everything can be that, after all. It pleases.