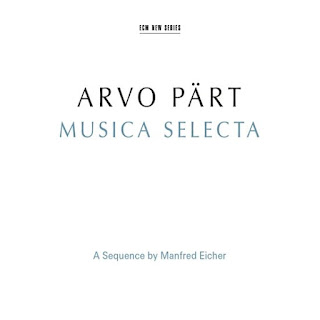 Some collaborations seem in retrospect inevitable. But at the time of the inception there was nothing that somehow guaranteed it or assured that it would take place. That is so of the close association of composer Arvo Part and producer/label owner Manfred Eicher.

Over 30 years ago Manfred had created a roster of jazz artists whose music had all in one way or another embodied a special ambiance and spaciousness that Eicher accentuated via his special sound-design productions. The result was the "ECM Sound" which was and remains extraordinarily influential as a style of music and a way of hearing it.

At that point he was fortunate to hear for the first time the music of Arvo Part, the Estonian composer who created a special kind of music that reveled in the sensuous properties of tone, drawing in part on the way early vocal-instrumental music performed in cathedrals gave out a special aura, drawing also on the sonic particularities of some of the minimal composers then coming to the fore, but ultimately going his own way to create a body of works that transcended all of what had gone before while capturing essentials from centuries-old traditions in an entirely unique way.

In point of truth perhaps Part's music struck an important resonating note with Eicher's own vision of musical sound and how one could capture and expand on it in the recorded medium.

Needless to say, the two bonded immediately. A series of now some 14 or so releases have come about since the first Part-Eicher recording was released in 1984. It spawned Eicher's contemporary classical label ECM New Series and effected a sort of revolution of what new music could sound like, both from the composer's perspective and that of the producer-engineer-sound sculptor. Nothing has been quite the same since; there have been many subsequent composers and recordings (including other composers on the New Series label) that were inspired by Part and Eicher's vision.

And so we after so many years are treated to a kind of Part/ECM retrospective that entails a special musical sequence created by Eicher to celebrate the many years of original first recordings made of Part's compositions thus far. The sequence tells via two CDs a kind of musical story that is both retrospectively exemplary in that it contains much excellent music by Part, a "best of" in some ways, but that in juxtaposing the sequence as Eicher conceived of it there is a heightening of the full scope of Part works as they contrast with one another.

The result is Musica Selecta (ECM New Series 2454/55 2-CDs), a collection of some 19 works and/or movements from works that Part has recorded with Eicher over the years, first recordings that have been definitive but of course spawned versions by other performers that often enough have some quality that makes them equally interesting but never quite bettering these inaugural releases.

Eicher via his sequence creates its own story line as it heightens contrasts between small (solo piano) and intimate works versus large and extraordinary full ones (choir and orchestra). Yet in the play of excellent performances there is continuity. The "small" ensembles hold in microcosm the attention to sensual and spiritual (for lack of a better word) tone painting that can be found writ large in the more massive ensemble works. Both take care to shift focus continually from the microscopic to the macroscopic in terms of sound staging and the use of vertical space, mass and the momentary but all-important silences between phrases.

I won't run down a listing of the contents of the set here. Suffice to say that it captures the full experience of Arvo Part, his music, and Manfred Eicher's meticulous sound-design productions of it all. Even those who like me have heard most all of it repeatedly get a fresh perspective on the music. That is what a retrospective if done well is supposed to do in the visual arts, and it is to be found in this audio collection as well. Needless to say it also forms an ideal introduction for those who for whatever reason do not know Part's music and have not the time nor perhaps the money to invest in the 14 albums that have come out.

It is an experience of musical beauty that is in its own special way transformative. These are the works and the recordings that have gone a great distance in creating a unified body of music not quite post-modern, modern or pre-modern, but rather Partian, so to speak.