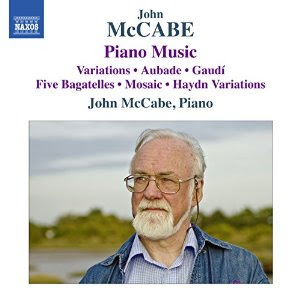 The late John McCabe (1939-2015), British composer, pianist and conductor, was a uniquely talented exponent of modern classical music, writer of some 250 works, belonging to no particular school but his own. I have covered several releases of his music on these pages (the search box above will bring you those) and now there is a third up for consideration, Piano Music (Naxos 8.571367), a collection of some six works written between 1963 and 1983, several in first recording (namely a good 40 minutes of later period works).

The composer himself is at the piano. Not surprisingly he seems to have the inner track on the kind of periodic event clusters he favors, groupings that often take the form of variations. The flow of events have some similarity to Messiaen's classic period piano works, but only in terms of sequentiality more than actual content, the latter of which is most certainly original McCabe.

There is a great deal of good music on the program, some 76 minutes worth. From the 1963 "Variations" to the 1983 "Haydn Variations" there is a progression and development to be heard, an increasing concentration of means and perhaps a certain increasingly brittle quality.

The variations range so far afield that it is not a simple matter to keep track of how each event relates to an original theme. They seem to grow out of each other to the everyday ear, and of course the important point is to savor the musical inventions each as a piece of the larger picture, which emerges only slowly. A brevity and terseness is especially out front on the not specifically variations oriented works included here, the "Five Bagatelles" (1964), "Aubade" (1970), "Gaudi" (1970) and "Mosaic" (1980). There are times when the tonality becomes atonality or borders on it. Unusual approaches to rhythm are often the case.

In the end we get a fascinating look at John McCabe thinking through his own modern approach to form and content on the pianoforte, using the instrument and his apparent love and understanding of the instrument to unveil structures that adhere within themselves more than they point outward to other musics.

In that we get a singular set of piano pieces that sound like no others. It is perhaps a most fitting volume to contemplate the McCabe musical universe as we regret his recent passing.

A strong volume that any modern classical enthusiast should find intriguing. Very recommended!