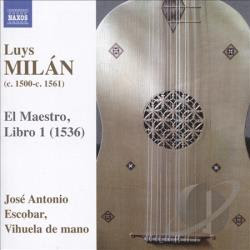 If you don't know composer Luys Milan (c. 1500-c. 1561), don't worry, you are not alone. He composed a series of works for the vihuela, a sort of lute-guitar hybrid (see image on cover above). His El Maestro is the earliest known publication of such works, printed in Valencia in 1536. He was associated with the court in Valencia as a vihuelist charged with "entertaining the ladies" (liner notes) there, not as an employee so much as a court nobleman. Not a great deal else is known for sure about him. The music speaks volumes, however.

Jose Antonio Escobar gives us some lovely performances of the music, specifically the El Maestro, Libro I (1536) (Naxos 8.573305). The vihuela sounds wonderful, lute-guitar like, with its (I believe) 11 strings, and Milan's music is well constructed and melodically vibrant, bringing out the instrument's special sound quite vividly.

As the liner notes suggest, there is sometimes the impression of imitative counterpoint in the music, but not in any strict sense. Nonetheless the two-part writing has considerable charm.

Maestro Escobar does a very fine job with the music and the CD has pristine clarity of sound and presence.

Anyone who has an interest in early music for lute-guitar will find this very engaging, as will those who wish to delve further into the Spanish Renaissance. But really it is music anyone who wants a little something different will enjoy.