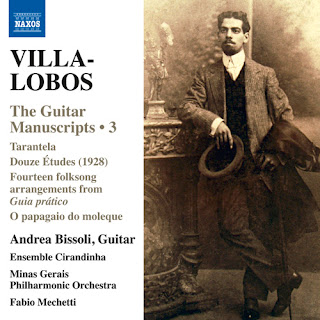 The long and very productive composing career of Heitor Villa-Lobos (1887-1959) included some of the finest music for guitar written in the last century. Yet there was a fair amount of it that has fallen into obscurity for various reasons. The Guitar Manuscripts series on Naxos addresses some of that, with Andrea Bissoli taking the solo guitar role, supplemented with others as called for.

We now find that The Guitar Manuscripts 3 (Naxos 8.573117) is out. It continues where the first two volumes left off (see my reviews of Vols 1 & 2 on these pages), with four works/sets of compositions, all most certainly of interest. The major contribution is the original 1928 versions of his "Etudes," then in 12 parts, that he wrote for Segovia. The final version was only published in 1953 and had been reworked somewhat, with changes, cuts and additions. This first version is fascinating to hear, as played by Bissoli on a 1917 Manuel Ramirez guitar, very similar to the 1912 Ramirez guitar Segovia was using when he and Villa-Lobos first met in 1924.

Opening the program is the brief but invigorating "Tarentella" (1911) which survived as a piano work but is here reconstructed by Bissoli in its hypothetical, original guitar version, convincingly so.

Villa-Lobos's "Guia pratico" was a series of short songs composed when Villa-Lobos was superintendent of music in Rio, 1932. The songs were intended for performance by schoolchildren, using various instrumentation depending on the resources at hand. Bissoli arranges fourteen of them for guitar and chamber ensemble. They are in first recording here (as is the guitar version of the "Tarentella), and are most certainly quite charming.

The final work is the 15-minute orchestral "O papagaio do moleque" from 1932. It is whimsical and a good bit of fun, yet also very much in the realm of Villa-Lobos as a brilliantly original orchestral stylist in his day, giving us a fitting close to a very pleasing program.

Not all of this music is monumental. But all is rather delightful. Anyone with a liking or even just a curiosity about Villa-Lobos in his early- to mid-period will find this a very enjoyable go-round. Bissoli gives us finely nuanced guitar renditions that all who dwell in the land of six strings will appreciate, too.