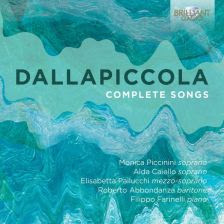 Luigi Dallapiccola (1904-1975) was arguably the most important Italian composer of the post-Schoenberg generation. If his music is perhaps not as widely performed as it was in his heyday, it is not due to a lack of merit. We can hear that readily in the new two-CD set Complete Songs (Brilliant 95202). As with the Busoni set yesterday, we get everything he composed, in this case for voice and piano, nicely performed by Monica Piccinini, Alda Caiello, sopranos, Elisabeta Pallucchi, mezzo-soprano, Roberto Abbondanza, baritone, and Filippo Farinelli at the piano. All give us excellent performances.

The repertoire here consists of the more-or-less expected and the unexpected, mostly the latter. The two volumes of "Italian Songs of the 17th and 18th Centuries" from 1961 take up the bulk of the program. They feature Dallapiccola's realizations of the figured bass and editing. Included are gems from Alessandro Scarlatti, Monteverdi, and others rather well-known or somewhat obscure. The music sounds a bit more homophonic than contrapuntal, which may have something to do with Dallapiccola's arranging-editing. The music is well-played and well-sung. It is all rather delightful.

The remaining two works come from Dallapiccola's first modernist period, from 1946 and 1948, . They are beautiful, somewhat early examples of his original explorations in the dodecaphonic, 12-tone style then so current. Both "Rencesvals, trois fragments de 'La Chanson de Roland'" (1946) and the "Quattro liriche di Antonio Machado" (1948) give us a rather brief but prime look at Dallapiccola in this period. He would write a great deal of vocal music but of songs these are the only two, other than several student works that he later renounced.

Even with all that the two-volume set gives you much to savor. The "Italian Songs" are of course quite untypical of the composer but delightful nonetheless. The two song cycles that typify Dallapiccola are essential fare.

It is so well done that you find yourself relaxing and simply enjoying it all. Bravo. The Brilliant price and the quality of the performances make it a most worthwhile set.