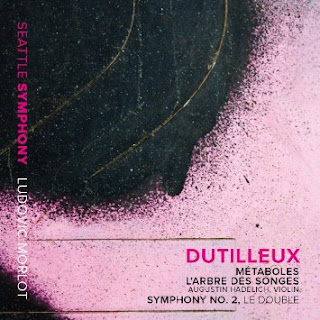 Henri Dutilleux (1916-2013) is often enough presented as a modern-day impressionist, a successor to Debussy and Ravel. That is doubtless true in that his music has a luminousness and vivid color palette that has something in common with the orchestral brilliance of those composers. He also has some organic affinity at times with the music of Messiaen. But on the other hand Dutilleux's music has an idiosyncratic quality, a modern approach that puts him in his own space in fine ways.

The volume at hand is an excellent example of this. It is a recent Seattle Symphony recording under Ludovic Morlot, presenting the works Metaboles, L'Arbre des Songes, Symphony No. 2 (Seattle Symphony Media SSM1007). The Seattle Symphony aims to record all of Dutilleux's orchestral works, and this volume is a part of that. As it so happens it is an excellent place to start, as the three works are very fine examples and the orchestra excels under Morlot in bringing them very much to life.

There is a continuity to be heard in the three works on the program despite having been written at contrasting points in time: "Metaboles" in 1964, "L'Arbre des Songes," a Violin Concerto, in 1985, and "Symphony No. 2 'Le Double'" in 1958. All three make excellent use of orchestration to bring out the shimmering quality of his constructions. The Seattle Symphony thrives in poetically realizing the full spectrum of sound colors inherent in the music, and the recording takes maximal advantage of the digital medium to give to us the detailed sound complexes in a gloriously full sound staging.

"Metaboles" and the "Symphony No. 2" share a rather mysterious, atmospheric liveliness that remains modern at all times in its sophisticated melodic-harmonic demeanor, with a kind of narrative unfolding that may suggest all manner of associations to the listener without evoking anything literal. It is sonic poetry of great depth and subsequently great appeal.

The concerted "L'Arbre des Songes" features an excellent performance by violinist Augustin Hadelich. As the later of the three works it shows a movement of Dutilleux's music from the profoundly sensual to the somewhat more concretely expressive, part of that stemming from the nature of the solo violin's role as Dutilleux conceived it. The orchestral passages remain vividly colorful. The rhythmic elements of the work are slightly more elaborately diffuse as violin and orchestra dialog with one another articulately. The violin's role is virtuostic and complexly declamatory in very musical ways, a showcase yes, but firmly tied to the musical vision of the composer. It is perhaps the most overtly "modern" of the three works at times, yet clearly partakes of the general thrust of the concerto form as it has evolved over the past century or so.

In the end we are treated to state-of-the-art Dutilleux, performed with great care and sensitivity to all the orchestral nuances that mark the composer's special sound.

It is a remarkable achievement. I surely look forward to the other volumes to come. In the meantime this one is ravishing, a stunner on all levels.