Elizabeth Hilliard, Sea to the West 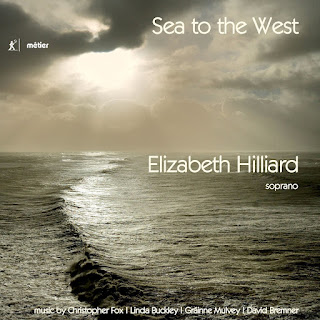 Dublin's Soprano Elizabeth Hilliard has a wonderfully full voice, a great range and the musical imagination to bring life to contemporary ambient soundscapes. Her recent album Sea to the West (Metier 28551) shows this admirably well, in a program of six works for solo voice plus occasional multitracking and electroacoustic enhancement.

The only given is Elizabeth's flexibly alive voice and a sense of open presence. Every work is evocative of association of place or earth, presence and poetic memory, all taken in its widest sense.

Time seems to stand still in the suspended vocal world unveiled. This is introspective music that puts the listener in a ravishing but ultimately spare and rarified zone.

The composers and Elizabeth's wonderful voice make it all work. This is not contemporary fireworks to awe the soul so much as an intimate hour or so with poetic depth.

To the thinkers and musically sensitive beings out there, this is a captivating change of pace.


Posted by Grego Applegate Edwards at 5:45 AM