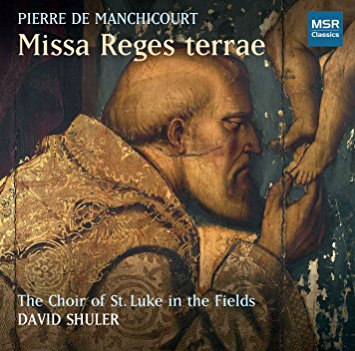 The art of imitative counterpoint in the right hands is labyrinthine and multi-refracted, a kind of minimalism that never quite repeats in its fullness and ever-overlapping movement, yet is build upon shifting repetitive blocks of sound. A master of the classic form of imitative counterpoint is one Pierre de Manchicourt (c.1510-1564), who thrived as a principal composer of the Franco-Flemish School of the second third of the 16th century. Perhaps because his style of composing was considered old fashioned in his last years (cf. Bach) his music has largely languished in obscurity until today.

Missa Reges terrae (MSR Classics 1632), a full disk of his choral works nicely performed by the Choir of St. Luke in the Fields under David Shuler, gives us a vivid snapshot of the brilliant interlocking style of Manchicourt which includes the World Premiere of the title piece as well as a number of equally appealing shorter works.

The performances are bracing, pinpont realizations of the music, hauntingly beautiful and glowingly soundstaged.

If we are at last able to hear Pierre de Manchicourt with open ears, it is because the times are right for his music at last. It has emerged from the archival darkness of 500 years to assume its rightful place in our musical pantheon.

Highly recommended!
Posted by Grego Applegate Edwards at 6:45 AM