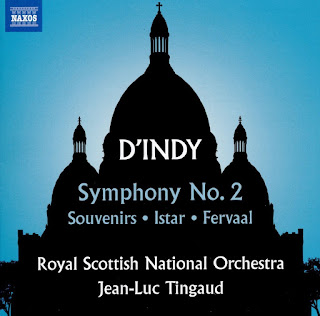 If you had to put a very short list of composers responsible for the French modern school in chronological order it might appropriately read Franck-D'Indy-Debussy-Ravel-Messiaen. Some might have trouble with the fact that Faure, Milhaud, and Poulenc were missing, or Boulez, or any number of others, but the main idea is that Vincent D'Indy (1851-1931) was as important to the modern French School's post-late-romantic beginnings as anyone, yet his music does not bask in the sunlight of continual performances and recordings around the world.

But, no fear. Naxos has released a representative assortment of D'Indy orchestral works headed by his Symphony No. 2 (8.573522). Jean-Luc Tingaud conducts the Royal National Orchestra in a set of dynamic, very serviceable readings that bring out the orchestrational excellence of the works and provide a clear roadmap through the thickets and twists of D'Indy's mature musical mind.

The Symphony (1902-03) at first might not strike one as revolutionary in its orchestral language, but close listening brings out the contrasts between folkish themes and proto-impressionist, dappled pictorial orchestration. For that matter Wagner's forest music from "Siegfried" was as much pre-impressionist as this D'Indy music could be, but then D'Indy established a French precedent that those that came after could identify as a possible national-modernist trait.

What matters now is that his music as heard in the Symphony, his melancholy "Souvenirs" (1906), the somewhat exotic "Istar" (1896), and the Prelude to his opera "Fervaal" (1889-95) offers us a snapshot in time of  what was progressive music. If we listen with open ears, we can hear something of what came after but also appreciate D'Indy as fully integral, a fully convincing musical personality in his own right.

So this is a nice volume to hear and listen closely to, well done and filled with D'Indy's special music. Give it a hearing!