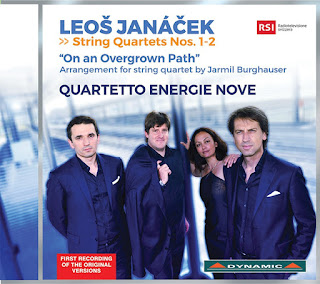 I regard Leos Janacek's String Quartets Nos. 1-2 (RSI 7708) as old friends. My first exposure to these tabula rasa gems was on an old Czech LP and until forced relocation last July and the loss of most of my LPs it admirably took its place in the listening rotation. The new World Premiere recording of the Barenreiter Critical Edition by the Quartetto Energie Nove has been filling my ears for several weeks and though I first preferred that old Czech version I am getting quite fond of this new one.

Included as a bonus is Jarmil Burhauser's arrangement for string quartet of the solo piano opus "On An Overgrown Path" (Book One) and I must say it gives the Janacek (1854-1928)  lover something "new" for quartet. If you didn't already know the piece you would not suspect it was not originally meant for the quartet. All sounds right in Burhauser's arrangement.

The String Quartets are primo Janacek, giving us a good deal of that uncanny combination of modernism, Eastern European folk strains, and an enormous memorability as only Janacek and his thematic brilliance can pull off.

Quartetto Energie Nove excels in a sort of folk brio, an almost Gypsy-like interpretation of the music at key points. They bring out that element remarkably well and though perhaps my old LP sometimes brought the sheer beauty of some passages out more so than Quartetto Energie Nove, after a few hearings it is the latter's approach that in the end sounds right to me.

This is a performance that will be hard to top. The addition of "On An Overgrown Path" makes the release all that much more appealing.

There are no quartets quite like this and Quartetto Energie Nove give us beautiful readings of the new Critical Edition. Don't hesitate!
Posted by Grego Applegate Edwards at 5:27 AM