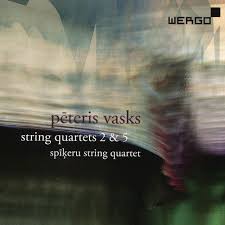 Peteris Vasks (b, 1946) a Latvian (Russian Soviet) composer of stature creates music he hopes will console and inspire the downtrodden--the ill, the poor, the harassed and harried among us. In that he does with music what perhaps his Baptist minister father did with words. The liner notes quote the composer at some length and give us a clear vision of the man. That rings true of the music on this, the Spikeru String Quartet's recording of his String Quartets 2 & 5 (Wergo 7329 2).

The music is mostly tonal, but also aleatoric and ultra-modern in brief passages that depict chaos and evil, beautifully folk-like and lyrical all at once.

The Quartet No. 5 begins with complex multi-stops and a dramatic folk-hymn feeling. It blossoms forth into a spectacular sonic harmonic world, then almost Beethovenesque in its dramatic, nearly breathtaking unfolding. The second movement begins in hushed sadness, fragile, lyric, and stays there for the whole. There is a healing quality here, yes.

Quartet No. 2 is a moving quasi-pastoral work subtitled "Summer Tunes." There is a seriously moving movement representing the coming into bloom, a gentle movement of bird song (first as if heard from a distance, then nearer) and a final elegaic conclusion of sadness and hope.

These beautiful works make one want to hear the other quartets at once, thanks to the Spikeru's loving attention to every detail of the music and the sheer persuasiveness of the works themselves.

Highly recommended.
Posted by Grego Applegate Edwards at 5:42 AM