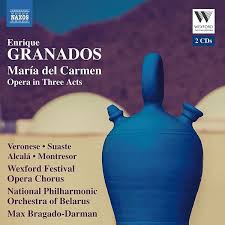 19th and 20th Century Spanish  Nationalist classical music, when done well, liberates the tonality from its pan-European shackles to give us music both folkloric and for its time, modern. That is certainly true of the music of Enrique Granados (1867-1916), a relatively early but very accomplished exponent.

We can hear this readily and consistently in his opera Maria del Carmen (Naxos 8.660144-45 2-CDs) as performed in the Wexford Festival Opera Production of 2003. It was written fairly early in his career, premiered in 1898 and after mixed reviews and a number of performances was not revived again until 1935. Part of that had to do with the Catalan contingent, who did not feel it was Catalan enough (the action takes place in rural Murcia). Yet Granados rightfully considered it an unqualified success aesthetically.

It was his first stage work and it speaks to us today directly through its lyric dramaticism and beautiful adaptation of traditional sounding rustic Spanish melodic-harmonic strains.

The present recording is very solid and convincing in the hands of Max Bragado-Darman, a host of soloists, the Wexford Festival Opera Chorus and the National Philharmonic Orchestra of Belarus.

Diana Venonese, in the principal role, takes some getting used to for her vibrato-heavy explosiveness, but one finds oneself adjusting in time. The production as a whole is first-rate and gives us a vibrant reading of the extraordinarily fetching work.

Anyone taken by Granados in particular and Spanish Nationalism in general will I believe readily respond to the work. Admirably well constructed, movingly lyric and emotionally direct, in is vintage Granados at his best.

Very recommended.
Posted by Grego Applegate Edwards at 5:43 AM