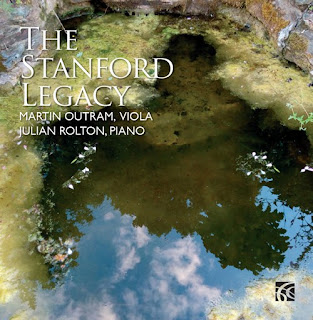 Several weeks ago we explored the choral music of Charles Villiers Stanford (1852-1924). Today we light upon the chamber element of the nearly forgotten composer, with three sonatas for viola and piano by Stanford and two of his illustrious pupils.

The Stanford Legacy (Nimbus Alliance 6334) showcases Martin Outram and Julian Rolton on viola and piano, respectively, and their strong, earthy interpretive acumen on display for the three substantial compositions that make up the program.

These Late Romantic-Early Modern sonatas are powerfully charged with depth of feeling but not of sentiment. Each has complex thematic virtuoso unfoldings that sound fresh, never cliched. This is music not designed as superficial salon baubles, but rather as earnestly serious fare for connoisseurs.

Stanford's influence as a teacher of composition was an important part of his legacy. He taught Bridge, Holst, Bliss, Vaughan Williams and, especially relevant for this album, Rebecca Clarke and John Ireland.

The Stanford sonata represented here was originally written for clarinet and piano in 1903 and was arranged for the viola as solo instrument by Henry Waldo Warner with the composer's approval in 1914. It shows obliquely Stanford's indebtedness to Brahms but with its own inventive thematic developmental path.

The Rebecca Clarke sonata gives us a rewarding view of the budding confidence of the composer and violist in 1919, who wrote over 100 works before marriage in 1944 put an end to it. There are whimsical passages, a rhapsodic depth and a hint of modernism in her chromaticism and sometimes harmonically advanced vocabulary.

John Ireland's First Violin Sonata of 1908 (revised in 1917 and again in 1944) in its re-arrangement for viola by Outram concludes the program with adventuresome fare that though often rhapsodic like the others has a strong pull towards post-romanticism while retaining a very lyric stance.

Outram and Rolton go a long ways to give us an expressively deep reading of these three sonatas. In the end we return to these works with real pleasure.

I imagine all modern era Anglophiles will be drawn positively to this album. Yet it will please anyone looking for late romantic chamber music of stature.