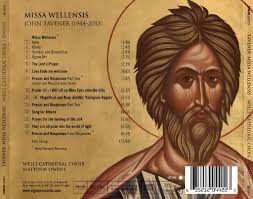 John Tavener (1944-2013) is one of the most striking choral composers of our time.  Like Arvo Part, he exemplifies an old-in-the-new transformation of early music influences to make something different--modern and very personal. In Taverner's case plainchant and especially Russian Orthodox chant are important models from which he freely and creatively draws.

We can hear some beautiful sacred choral music along these lines on the album  Missa Wellensis (Signum Classics 442) featuring the Wells Cathedral Choir under Matthew Owens. Four of the works, including the title piece, enjoy world premiere recordings. All eleven mostly short works are given definitive, angelic treatment by the choir.

The homophonic influences of Orthodox chant and Organum are apparent throughout. As with much of Taverner's choral music the archaic and the contemporary form the basis for his sensitive brilliance. These are the late works (2010-13), written after a debilitating heart attack (2009) forced him into convalescence and ultimately a determination to boil down the music into a sacred essence. As the liners note, these last works proffer an austere music, indeed, but there is warmth and a penetrating sonic depth to it all in the end.

The "Missa Wellensis" and the "Preces and Responses" were specially commissioned for the Wells Cathedral and so have a pedigree that the choir readily makes present in their performances. But all of these works get detailed attention and sonic care.

Anyone seeking modern choral music with ancient roots, anyone interested in Taverner's last works or who do not know his music as a whole would do well to get this volume. It is in every way a celebration of the beauty and direct celestial inspiration of his final musical vision.