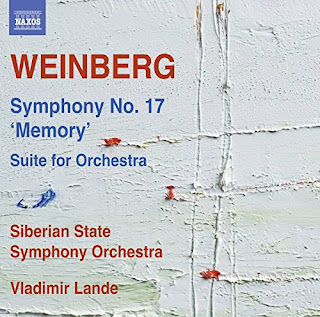 The emergence of  Mieczyslaw Weinberg's music since his death in 1996 has been one of the remarkable events of our time. All-but-forgotten at the end of his life, his Polish-Jewish origins, migration to Russia when the Nazis invaded his homeland, his friendship with Shostakovich, who was an unflagging champion of his music, trouble with Stalin and the social realism music police until Stalin's death, his rehabilitation and greatest period from that point forward, all are the stuff of myth yet at times had to have been as harrowingly real for him as a living nightmare. He continued to compose fruitfully no matter what he faced.

And now today we have another significant release, featuring the powerful, bitter turbulence of the first of a trilogy of WWII symphonies, Symphony No. 17, "Memory" (Naxos 8.573565), a work that in its power, drama and scope fits in well with Shostakovich's 7th and Prokofiev's 5th as the definitive Russian war symphonies.

Weinberg's full subtitle to the work was "In memory of the fallen in the Great Patriotic War." In spite of ultimate victory the Russian death toll was among the highest of the allies, and the music reflects what many no doubt felt, a terrific sense of loss.

Vladimir Lande and the Siberian Symphony Orchestra give us an impassioned reading, haunting in its great depth, meditative introspection and labyrinthine expression. The sonics are excellent and the performance never flags.

As a bonus we get an early '50s work written during a time when his life was in danger, principally for his Jewishness. The "Orchestral Suite" no doubt was written in an attempt to satisfy the precepts of social realism. Yet the first three movements have a  modern and at times Jewish harmonic-melodic core behind the "lighthearted" veneer that no doubt might not have pleased the censors. This recording is a first, and it is suspected too that it is the very first performance. It is by no means a landmark work yet it is fascinating and contrasts with the symphony dramatically.

All-in-all this is a valuable addition to the Weinberg discography, mostly for the vibrant reading of the 17th. It might not be my first choice for an introduction to the composer (see the index box for other releases I have reviewed here), but it will no doubt be welcomed by enthusiasts like myself. Recommended.