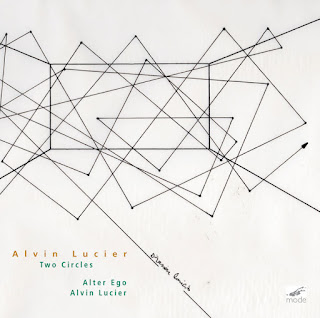 The avant garde new music world in the '60s and beyond in the USA? The world has not caught up yet, except of course for those intrepid listeners who have made a point of immersing themselves in its explorations and exceptionality. One can draw connecting lines between the American and European scenes of course, and what has taken place in Japan. In the end though there have been as many differences as convergences.

The all pervasive influence of John Cage has been decisive here. His liberation of noise and silence, the use of chance and indeterminacy, and the overall nonconformist and Zen obstinacy has left a mark on those who came in his wake.

Alvin Lucier (b. 1931) has been one of the more controversial and innovative of the post-Cagean 20th century group. Two Circles is a recent anthology of  Lucier chamber works for instruments, electroacoustics and voice. The chamber ensemble Alter Ego  brings to the music great care and understanding. The works cover a broad swath of time from 1968 through 2012.

The earlier work, I Am Sitting in a Room (1968) has the uncanny meta-part for Lucier's voice, remade now so that his voice shows a golden ripening. It is a simple statement of what the project is meant to do, and then its repetition, each time played back into the room so that Lucier's voice becomes an acoustic transformation that gradually takes on the room's acoustic resonance and in the end becomes that room.

His instrumental works represented in this album have to do with tunings and microscopically contrasting alternate tunings that beat against one another, and the making present of the acoustic properties of the space in which the music sounds.

There is more to it than that of course. And there is a science-like rigor to it that in the end brings enlightenment to the hearer. There are a times an almost clinical quality that may at first be off-putting. But ultimately the music stands or falls as music. Lucier's music can be difficult and challenging. These works are most certainly that. Yet careful, repeated listens take you on a journey through a microscopic universe that has all the qualities of aesthetic experience but brings us there in ways more radically contemplative than we may be used to.

Two Circles serves as a worthy introduction to Lucier. It adds to our appreciation of his music if we already are familiar. This is certainly not in the realm of entertainment. For those willing to take the music as seriously as Lucier intends it to be it is revelatory.
Posted by Grego Applegate Edwards at 6:01 AM