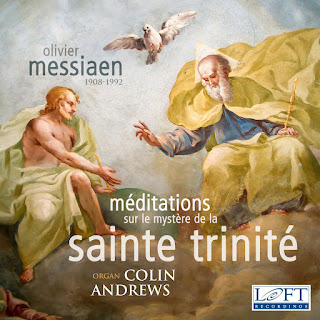 Messiaen's Meditations sur le mystere de la sainte trinite (Loft 1150) is one of the monumental organ works of our day. Messiaen completed it in 1969. It started in 1967 as four improvisations in celebration of the rebuilding of the organ at Sainte Trinite as well as the 100th anniversary of the cathedral's existence. The work grew and blossomed until it reached its final form. Birdcalls, plainchant, and Greek and Indian rhythmic patterns all are incorporated into the work, as was the case in varying degrees in his later period.

Of all of Messiaen's organ opuses of the later days this one is as complex and monumentally titanic as any. Organist Colin Andrews comes through with a reading that underscores the complexities but also draws coherently the outline shape of the ongoing structural essences. That is only to say that in his hands there is great sympathy and understanding for the work and its fullness.

The Meditations are essential listening--both as some of the most advanced modern organ music ever written and as a milestone of the composer's later evolution. This version rivals any others I have heard. Get it without hesitation.
Posted by Grego Applegate Edwards at 7:05 AM