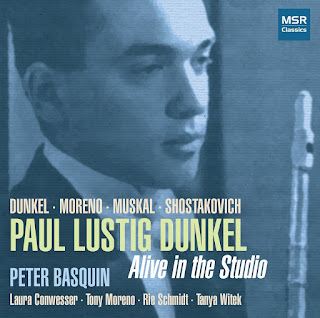 Extraordinary flute master Paul Lustig Dunkel appears before us at the peak of his powers on the recital recording Alive in the Studio (MSR Classics 1554). On it Peter Basquin provides sensitive and appropriate accompaniment as needed. Laura Conwesser, Rie Schmidt and Tanya Witek flesh out the flute quartet on Dunkel's "Quatre Visions Pour Quatre Flutistes." Tony Moreno gives us the percussion-drum part on his "Episodes for Flute and Percussion."

Those are the bare-bones basics. It is the flute of Dunkel and its fine tonal presence and virtuosity that carries the day in the end. He is a well healed flautistic spectre on Dunkel's arrangement of Shostakovich's "Sonata for Cello and Piano in D Minor Op. 40." The work sounds completely natural and poignant in the flute substitution of the cello part.

Dunkel's own "Quatre Visions Pour Quatre Flutistes" (2014) has a dynamic and very idiomatic fullness and inventiveness about it. The four-fold flute family sonority is a joy to hear.

The rest is worthy as well. It all ends up as a model of what a world-class flautist can do. Bravo!

.
Posted by Grego Applegate Edwards at 5:17 AM