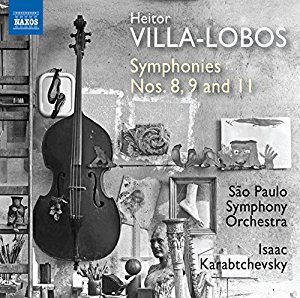 It does not matter how far along I go in life. It seems like every so often there is more excellent Villa-Lobos to discover. Naxos has been doing a good deal lately to underscore how his entire oeuvre has much to recommend it.  That is the case once again in the latest release from the Villa-Lobos symphony cycle, the Symphonies 8, 9 and 11 (Naxos 8.573777) as played with great capability and verve by the Sao Paulo Symphony Orchestra under Isaac Karabtchevsky.

They are a product of Villa-Lobos' later period, having been written between 1950 and 1955. They have that distinctive meld of rhapsodic modernism and Villa-Lobos' own take on Brazilian influences. In the case of the latter there is less of a direct line to a national strain and more of a haunting. Everything he did had some relationship to his rich Brazilian heritage but then in this case there is less a conscious effort of incorporation so much as a natural predilection that gets harnessed to a symphonic classical-modern identity. The years in the United States had no doubt an influence on the widening of his musical view, but in any event it reflected a natural growth and a continued opening of his expressive needs.
.
By this time Villa-Lobos had fully mastered the modern orchestra as a personal extension of his musical personality, so much so that you could recognize him by hearing only a few bars of a work. These three symphonies give us a generous helping of the composer at this juncture. All of them are substantial and very worth hearing. Perhaps the 11th has the most gravity, but then the 8th and 9th have the most buoyancy.

None of these symphonies are inconsequential. Far from it. They are manna for the Villa-Lobos enthusiast and a deep plunge into the later world of his approach even if you are not fully conversant with his total span of expression. Karabtchevsky and the Sao Paulo Orchestra breathe a good deal of plein air into the scores.

An excellent addition to anyone's Villa-Lobos holdings! Very recommended.
Posted by Grego Applegate Edwards at 6:06 AM