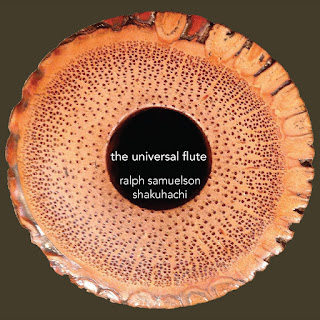 The venerable art of Japanese Shakuhachi flute goes back some ways, to a sect of Zen monks in the 17th and 18th centuries. Today we contemplate a Western player of great finesse performing a program of contemporary, mostly American compositions on The Universal Flute (Innova 942).

We are treated to five compositions, each combining deftly the traditional Shakuhachi tonality and technique with some new music twists. Ralph is either unaccompanied or joined by idiomatic ensemble elements: koto, kugo harp, vocals, shamisen, and bansuri. As in the traditional art there is the use of space and special attention to each note to get a cosmic sort of suchness that is part of the aura surrounding the shakuhachi. This explains the album's subtitle "Discovery in a Single Tone."

We experience two versions of Henry Cowell's "The Universal Flute," one for unaccompanied flute and the other with bansuri accompaniment. Then follow Teizo Matsumara's "Shikyoku Ichiban" with shakuhachi and koto, Richard Teitelbaum's "Hi Kaeshi Hachi Mi Fu," Bun-Ching Lam's "Three Songs of Shide" with kugo harp, and Elizabeth Brown's "Afterimage" with shamisen and vocals.

This is music of depth, something that will appeal to all who know the shakuhachi tradition as well as those seeking ambient meditative moods. Samuelson is a true artist of the instrument and the music has much about it to explore and discover.