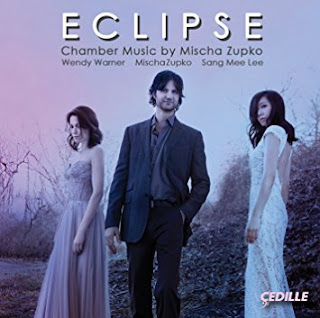 Mischa Zupko writes with a modernist flourish music that sometimes has a lyrical underpinning, while always to my ears blossoms forth with a personal fluidity in his insightful musical-dialectical discourse. The Zupko anthology Eclipse (Cedille 90000 168) features chamber music for piano (Zupko), violin (Sang Mee Lee), and cello (Wendy Warner).

Each work has literal thematic content. "Rising" (for violin and piano) is all about meditations on the ascension of Jesus. "Fallen" (for cello and piano) is based on a Garcia-Lorca poem about the suicide of a young man of promise who has fallen into despair."From Twilight" (for solo violin) comes out of the experience of observing the evening sky as the curtain of night gradually descends. "Eclipse" (for violin and cello) encapsules the feeling of serenity as an evolving eclipse condition is made into music via the overlapping and mingling of motives for the violin and cello. "Nebula" (for solo cello) pits the cello against silence as we are exposed to parts of a wide overarching arc of musical content.

From there we go to "Shades of Grey" for violin and piano, in four movements, realizing in musical terms the marriage preparations of Winston Choi and Minghuan Xu, otherwise known as Duo Diorama, for whom the work was written.

"Love Obsession" (for cello, piano and six prerecorded cello tracks) is the dramatic finale. It deals with the relentless pursuit of a love object by a determined subject. Highly rhythmic figures portray the manic chase of passionate absorption, ending in some sort of quietly realized fulfillment.

There is no simple description of how this music plays itself out. Every work is a world unto itself. Zupko is musically multilingual in the way he adapts a spectrum of tonal possibilities and spins his own original form and content for each.

The trio of musicians each brings an enormous absorption and focus to the music, making it sing, bringing its reflective and reflexive brilliance to bear on our experiencing ears.

Zupko has a musical mind both open and exceptionally inventive, certainly as exemplified by the works on this album. He is like a fine wine. He is best savored, allowed to breathe. You need to open yourself up, to permit his many faceted music to resonate against your listening sensibilities in a state of centered concentration,  Like a complex wine at a peak of maturation, the long finish you experience is just as you might have hoped, in the end satisfying and total in its effect.

I have no hesitations in recommending this music to you.
Posted by Grego Applegate Edwards at 6:16 AM