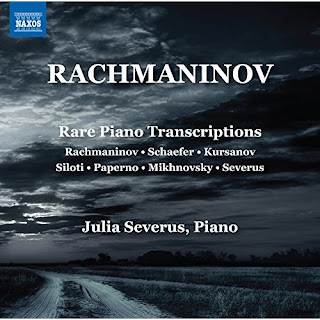 Yesterday, I spoke a little about how the romantic piano practice of rubato cascading became more harmonically daring in the hands of Scriabin and ended up further extended by a composer like Roslavets, but that by last mid-century modernist pianism had all but jettisoned the stylistic parameters which found its most eloquent practitioner in Liszt.

What such a scenario ignores is the figure of Rachmaninov. (Early Prokofiev aside, who was already very much more the modernist.) Like at least on the surface we think of Bach and his attention to fugal form even if in his later years it was no longer au courant. So Rachmaninov espoused the rolling romantic rubato when many of his compatriots had moved on. I would not want to suggest that Rachmaninov reached the sublime heights of Bach in his anachronistic endeavors. That is no doubt unfair. How many composers would you put alongside Bach in any way? Very few.

Rachmaninov (1873-1943) stayed stylistically where he began, for the most part. Of course he excelled in lyric effusions and left us with some beautiful piano music that transcends time in the best ways.

For those like me who cannot get enough Rachmaninov piano works, there are today a batch of them that you no doubt have never heard, at least not like this. I speak of the recent CD of Piano Transcriptions (Naxos 8.573468). On it is Rachmaninov's transcription of the  "Suite in D minor," which was discovered only in 2002, along with a transcription of the Intermezzo from Aleko, plus 21 of his songs, transcribed for solo piano by Rachmaninov and six other composers, including the pianist on this collective program, Julia Severus.

She is most definitely in her element with this music. A more sensitively romantic but never overly gushing exponent of this rare music would be hard to find.

Many of these pieces, indeed most are in first recordings. The songs in their original form contained involved piano parts, so that the transcriptions carry over the extraordinary pianism and integrate it fully into the solo realm.

Perhaps not everything to be heard on the program is an absolute masterpiece, but then some come close. For those for whom the Rachmaninovian path is one you long to linger on, this small fork into more vistas will doubtless delight you.

Posted by Grego Applegate Edwards at 6:29 AM