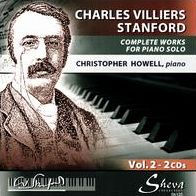 On July 3, 2016 I favorably reviewed Volume One of the Complete Works for Piano of Charles Villiers Stanford. Today I cover Volume 2 (Sheva Collection 125), once again performed nicely by pianist Christopher Howell and filling up two CDs.

Stanford (1852-1924) is not as well remembered today as compared with his stature in England during his lifetime. He is perhaps best celebrated nowadays for his choral works. The music for piano shows a rather different aspect of his music. Like Chabrier in France, Stanford produced a body of piano music not really neo-Romantic, not exactly neo-Classical, not much dependent upon great flashy technical skill, but rather a kind of pure musicality that is by no means harmonically advanced but straightforward, no mere trifles by any standard. It is what you might call a combination of Salon and Pedagogic music, but none of it has a pretentious or highly sentimental outlook.

What you do hear is very English, some miniature stately pomp, lightheartedly tuneful ditties, and pastoral, rustic folksy-tinged works which no doubt Vaughan-Williams and Holst gained from as a prefiguration of what they more fully developed.

Like with the first volume there is an unexpectedly disarming quality to the whole. It does not pretend to a ponderous importance and by so doing brings nonetheless delightful piano music that neither seems quite dated nor does it fully transcend its era.

And in that way we intersect with some worthwhile music. Volume Two forms a perfectly enjoyable counterpart to the inaugural volume. I will return with my take on the final volume three in a little while. Meanwhile these are a bit of a surprise treat!
Posted by Grego Applegate Edwards at 6:14 AM