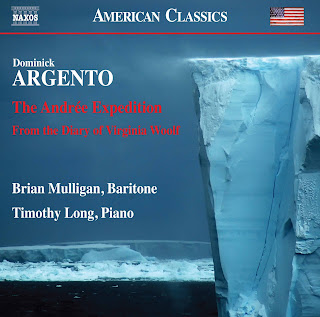 The song cycle has become somewhat rarified on the New Music front. There do not seem to be so many of them compared to earlier epics. This is no place to speculate on the reasons right now.

There are notable exceptions. The song cycles of US composer Dominick Argento (b. 1927) are one. We hear two on The Andree Expedition (Naxos 8.559828), the title cycle plus "From the Diary of Virginia Woolf." Music takes over when speech can go no further, believes Argento, and both of these cycles demonstrate that idea well. They extend the meaning of the texts in ways that speech alone cannot, shading them in pastels and hard-edged outlines, underscoring in music what the words suggest, creating the atmosphere, giving a deeper setting for the story as it unfolds.

The music in this Naxos edition is performed quite capably by baritone Brian Mulligan and pianist Timothy Long. The pianist is very sensitively attuned to the ever-present commentary and sometimes the dimensional contrast his accompanying role calls for. Mulligan has a highly dramatic approach, which fares especially well in the softer, more reflective sections. When he is at forte and especially above that his is a rather hard sonance. It takes some getting used to. The music warrants it in its extraordinary depictions.

In the end though we come for Argento's music.

And we get it in all its impactful drama. "The Andree Expedition" (1982) is based on diaries and letters surrounding the tragic balloon expedition to the North Pole in 1897. "From the Diary of Virginia Woolf" (1974) culls eight entries as the vocal text, filled with self-confessional candor. It won the Pulitzer Prize for Music in 1975.

The title work consists of 13 songs that relate one to another. The human struggle against daunting odds forms the core of the music and text. A sample from one of the participant's accounts: "It is indeed a wonderful journey through the night. I am cold but will not wake the two sleepers. They need rest. If any of them should succumb it might be because I had tired them out." It is a bleak account of a bleak disaster. The music reflects regret and dilemma in a modern expressionist way. It has a presence that shows Argento's flair for the possibilities of vocal declamation, drawing out the implications and setting them squarely into the music. The singer personifies each of the three balloonists and so gives us a sort of trifold narrative of the unfolding disaster.

The Virginia Woolf diary cycle has a slightly different slant, as Ms. Wolfe's inner and outer life come into conflict and create various mood pieces and a creative struggle to harness it all somehow. It complements the expedition song cycle well.

In all we get nearly 80 minutes of Argento song drama at its most distinctive. It is at times VERY expressive, and so not exactly light fare to put on as background. Perhaps that is inevitable by nature of the subject matter alone. The music demands your attention, then rewards it. For a modest Naxos investment one gets a provocative introduction to Argento's modern take on the song cycle. That is something very illuminating and moving. All modern song students will get real substance here.

Posted by Grego Applegate Edwards at 6:44 AM