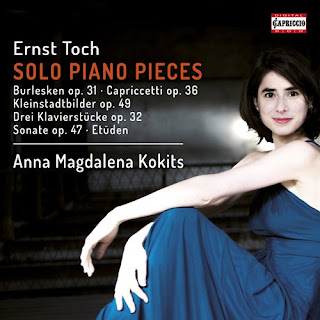 If you were only to say one thing about Austrian composer Ernest Toch (1887-1964), it might be "undersung." He is not quite completely "unsung," as there have been some very few recordings available in the States, including a long out-of-print LP of a song cycle on MGM in the fifties, but he has been tragically underappreciated nonetheless.

A very happy exception is the recent release of Anna Magdalena Kokits' recording of some of his Solo Piano Pieces (Capriccio 5293). These are a choice selection of works from the interwar years (1923-1931), when he changed his essentially romantic approach to a very contemporary one, mostly post-tonal or marginally tonal, filled with an energetic brilliance and sounding not quite like any other. His father was Jewish and the Fascism of the war years undoubtedly played a part in what has ended up as relative obscurity for him. I do not know the full details. Wikipedia tells of his exile to the United States, his involvement in Hollywood film scoring, teaching, a Pulitzer Prize for his Third Symphony and a return to the romantic style. None of this should detain us for now. The music on the current album speaks eloquently without need for further biographical details.

From the opening bars of the first work, "Burlesques" (1923), we know we are in the presence of a special sensibility. Chromatic and bitter-sweet, it is a distinctive and very pianistic world we enter, neither quite Hindemithian nor beholden to the Second Viennese School. The atonality in this period of Toch is a relative one, since one might ultimately tie down what one hears to a key center. And some of the music is unabashedly tonal. There is a great deal more to it though than some close or distant holding to a key or a tonal gravitation.

And that comes out in the phrasing and flow of the works, brought out so well in Ms. Kokits' performances. They are extraordinarily artful, inspired and original.

The seven compositional forays represented on the album range from the relatively simple "Ten Etudes for Beginners" (1931) to the ambitious "Piano Sonata" (1928). The numerous collations of miniatures in the set show us an incisive side, an inventive wealth. Some might be viewed illuminatingly as a sort of Austrian Satie in playful creative mood, others decidedly have some more Austrian elements, in a kind of modern position on the piano tradition going back to the classical masters yet only as if ghosted and transformed. The longer form works expand the conversational musical syntax appropriately.

With the first listen and subsequent ones, the impression of an original musical mind at work remains constant. This particular grouping of Ernest Toch stands out as defining a 20th century figure much more than an "also ran." The album beguiles and intrigues without fail. Please consider this one seriously. Any student of the flowering of last century in its modern efflorescence will hear another fine voice in the din of competing possibilities. Do listen.