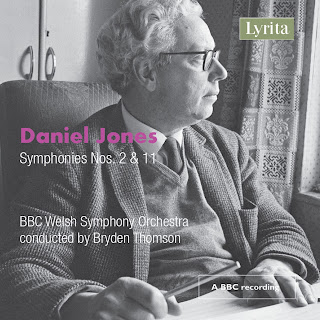 Welsh Composer Daniel Jones (1912-1993) is best remembered for his 13 symphonies, which he defined as "dramatic structures with emotive intention."  He is represented on today's disc by an early and a late example of his work in the medium, Symphonies Nos. 2 & 11 (Lyrita SRCD 364). It is a respectable performance by the BBC Welsh Symphony Orchestra under Bryden Thomson. Judging from the catalog entries in the back of the CD booklet Thomson aims to cover the complete cycle. Since this one is marked ADD I suspect they all were recorded a while ago?

The sound quality is not quite audiophile level. What matters is that we get a faithful representation of what these symphonies are about.

Jones began composing early in life and in youth established a friendship with Dylan Thomas. The two collaborated on a number of poems. Jones ended up getting his BA and MA in English. His MA thesis was on Elizabethan poetry, and his ancillary exposure to the music of that period influenced his melodic conception, so says the liner notes. He studied composition and conducting (with Harry Farjeon and Sir Henry Wood) at the Royal Academy of Music. His recognition as a composer first came in 1950 with his "Symphonic Prologue." Thereafter he gained attention and amassed a sizable number of works in all genres as well as conducting.

Symphony No. 2 was completed in 1950 and is a longish, ambitious work clocking in at nearly 44 minutes. It has a modern edge to it but hearkens back in some ways to Neo-Romantic expression, more extroverted than some and edgier than Elgar. And there surely are brilliant moments and an attractively wayward individuality.

Symphony No. 11 is shorter, more compact and shows an increasing originality and orchestrational flair.

He was no rabid modernist but neither would either symphony be mistaken for an earlier period work. He was of his time. And sure of his direction from the 1950 work as well as the later symphony from 1983.

Any musical Anglophile will be well served by this volume. It shows us a Daniel Jones who travelled a path of his own, emotive and drenched in Romantic symphonic tradition, yet speaking to his era. Well worth hearing.
Posted by Grego Applegate Edwards at 6:21 AM