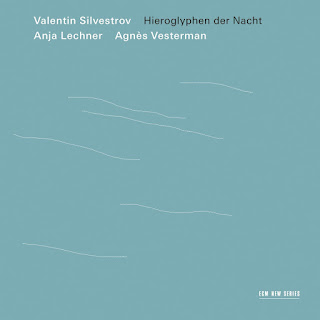 Modern new music works for one or two cellists. . . if you imagine in your head what that might sound like, you may be surprised when you hear Valentin Silvestrov's Hieroglyphics der Nacht (ECM New Series 2389). It is a series of six works, four for cello and in one case simultaneously sounded tamtams featuring Anja Lechner, and two for cello duo with the addition of Agnes Vesterman. The release happily coincides with Silvestrov's recent 80th birthday. He sounds much younger than that, ever youthful!

Silvestrov is a composer most acutely aware of the sonic possibilities that are limited only by his fertile imagination, so that this music is expansive and deeply resonant, ambient yet focused on the notes themselves as well as harmonics and other careful interweavings of extended and more standard techniques. He may see himself as a kind of "coda" to music history. Yet we who listen feel the march of time, a moving forward in the music that may bring with it some of the luggage of the past, yet the trip is not at all backwards. It is moving ahead.

Silvestrov began his composing career as an avowed high modernist in Soviet Russia (despite general governmental hostility to such things), then came to realize that "the most important lesson of the avant-garde was to be free of all preconceived ideas--including those of the avant-garde." And so in time his music evolved into what he calls his "metaphorical style," or "meta-music." Sometimes that involves a conversation of the present with the past.

Yet in these works for single and duo cello there are concentric gestural focal points that continually move forward with a poetic deliberation. Lechner and then Lechner and Vesterman bring determined clarity and perfect execution to the atmospherics that are understandably greatly heightened by Manfred Eicher's sympathetically complementary sound staging. Lechner notes that the solo pieces especially play with the idea of two alternate musical personas that engage one against the other like shadow and light.  Throughout this program the one out of the two feeling can show its forward momentum to the deep listener in time. It did for me. So I think for you, also.

The duo works are written as if for one extended cello, or cello "four hands," where the interlocking parts sound together closely as one expanded voice in space. "2.VI.1810. . . zurn Geburtstag R. A. Schumann" evokes a would-be lockstep, harmonically anchored allusion to the music of Schumann's making but as if heard across the vast distance of time, a ghostly vision, a rubato that transmits as if a short wave radio signal emanating from far away, a there-not-there mist of sound more than a real-time presence. This is musical poetics of a high order.

One could go on at greater length about the impact of each work. The liner notes to the album wax on about such things perhaps far better than my distanced connection to this remarkable music can do. I have perhaps the disadvantage of dis-local participation with such music, yet my distance I do believe helps me evaluate how such music sounds to the well-tempered listener not conjoined in the everyday discourse of the emanation points. So when I feel the magic inherent in this music and its considerably focused and inspired performance, it is I hope what you may well also feel as part of the relational yet distanced ears of the world.

So for all you potential listeners out there, whether you love the cello and its many sound worlds as I do, or you are neutral and primarily seeking out music that is worthwhile, Silvestrov and his extraordinarily accomplished cello playing concretizers give you a world of true magic on this one. After a short time you start forgetting how much has gone into making this recording so compelling and instead enter another universe of human sound and the associative thoughts those sounds give rise to. It is as of you have become immersed in the middle of a super musical particle collider where YOU become happily penetrated with sublime aurality. Really.

Stunning music in any case. Adopt these works into your musical family, by all means. Strongly recommended.